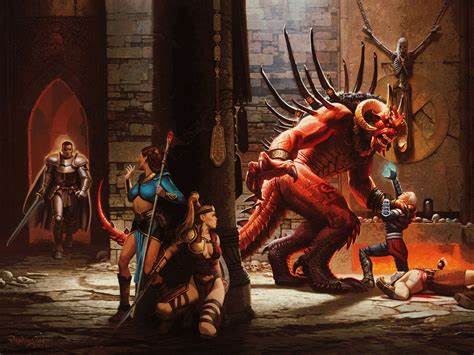 Diabolo II Resurrected (D2R) is a remastered version of the Diablo game series. This game does make the visual modernization process the main attraction. The new visual quality offered by Diablo II: Resurrected indeed makes it worthy to be compared with the release of modern isometric RPG games though. Everything was revamped, including the character models for each class which now look full of detail, complete with attack effects from fire magic effects to the appearance of various monsters that can be summoned by Necromancers, all of which also get an overhaul. The addition of new lighting effects in several dungeons that look more sinister also makes some fighting areas now look more dramatic than the original series.

The launch of this game was also delayed, and received many complaints from players when it was finally released, such as unstable servers, and many bugs. This makes many players feel disappointed with this D2R game.

However, over time, the developer also made a lot of improvements through the updates and finally the players can enjoy this game as it should.

The story that Diablo II: Resurrected offers is no different from the original Diablo II series and its expansion pass – Diablo II: Lord of Destruction.

Diablo tells the story of a world called Sanctuary that should feel at peace after Diablo was defeated by one of the heroes. But in fact, Diablo’s stronger soul and evil aura actually ended up making him submissive, giving birth to more chaos. You will play as an adventurer (whose job you will choose at the beginning), who is called to investigate and subdue various types of threats that Diablo is planning behind the scenes. A journey involving great demons that must be subdued.

With no different story from the original version, as well as an additional expansion pack that will give you an extra chapter at the end, then those of you who are familiar with Diablo 2 before will still get a similar experience. This also concerns what missions fill each existing act, what characters are involved in them, and where is the location of each boss that you have to subdue. Blizzard keeps all of that in Diablo II: Resurrected.

Not much different from the original game, Diablo II: Resurrected brings RPG action gameplay with a distinctive isometric appearance. The gameplay follows story missions divided into various acts, each of which offers a series of quests to complete. Before starting the game, you will be presented with a wide selection of character classes that have different characteristics and playing styles. From here you can immediately embark on a mission adventure through various areas, defeating various types of dangerous enemies, while collecting valuable loot some D2R  Items to increase the strength of your character and make your adventure run more smoothly.

For the gameplay, keep in mind that Mana and Healing are two very essential items in restoring your character’s magical energy capacity and HP, so make sure to always use them at crucial times, especially when dealing with challenging battles. Speaking of loot, Diablo II: Resurrected still maintains the same random loot system as the original series, where facing difficult monsters or bosses doesn’t always guarantee good loot to get. This can make the playing experience feel less rewarding, especially if you spend a lot of consumable items even with good D2R Ladder Items just to defeat an enemy who turns out to be poor in loot and seems like a waste of time.

The control scheme itself still feels as stiff as the original game, where you have to manually hover over the skill access to only a few buttons. The console version has clear differences, but fortunately the developers managed to maintain a control scheme that we feel is more optimized and comfortable. This is further enhanced by the automatic aim system, but for new players we think it will take longer to adapt to the control scheme. For example, when you want to attack an enemy, you can sometimes mispress the ground nearby, as well as when you take the scattered loot one by one with mouse click spam.

The character development features are also still being maintained, this can be seen from the skill tree access to increase character statistics. With the option to strengthen Strength, Dexterity, Vitality and Energy, you are given the freedom to choose what abilities your character needs more. Whether it’s prioritizing points for the skills you use the most, or the default stats to make your character feel thicker like a tank, or a character with a focus as a damage-dealer. At least this is one of the classic systems that we do not think needs much change.

Building the character with some extra equipment also important for some players who want to compete to play until the end game. Exploring the dungeons, beating the bosses, loot some best items that the game can offer. In fact, some players also considering to buy diablo 2 resurrected items many platform and marketplace such as p2pah.

For overall gameplay and features, it can be seen that the gameplay system is not so much different from the classic Diablo II series, because Resurrected is more focused on improving its graphic appearance so that it is easily accepted by newcomer gamers. The main reason is also because Blizzard didn’t want to make too many changes that could spoil the nostalgia, and this is something they definitely need to get back to attracting interest from veteran fans.

Keeping so many classic elements while offering a new form that can match the games of today’s era, Diablo II: Resurrected ends up being a pretty unique combination. There is an outdated sensation that is very obvious when playing it live, but at the same time we are also presented with a more fresh Diablo experience. In terms of aesthetics, this game managed to answer the expectations of its players with a quality that turned out to be better than expected. This can especially be emphasized on the graphics with the remake game feel, the better audio quality, and even the addition of a special mode that allows you to change the graphics to classic mode in an instant. So there is no need to doubt about the game presentation.